back to the Update 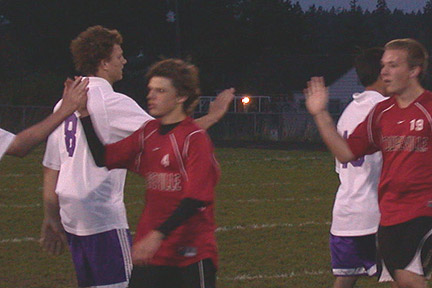 The second-ranked Friday Harbor Wolverines (12-1-1, 9-1 in league) got two goals from senior captain Eric Rothlisberger with a convincing 5-0 victory over visiting Coupeville  (9-7, 5-5 in league) Tuesday night. The win leaves FHHS alone on top of the Northwest League in the end-of-season standings.

It only took Friday Harbor 50 seconds to score its first goal, as senior forward Felipe Lopez and sophomore Erik Nash passed the ball back-and-forth until Lopez deposited a Nash head-pass in the back of the net. Lopez made it  2-0 at the half as his corner kick found junior scoring leader Mario Nunez on the far post.

The Wolves came out firing in the second half, and created good chances early on, but FHHS dashed their comeback hopes with an Erik-to-Eric score at 48 minutes. Lopez took sophomore defender Kevin O'Connor's pass up the sideline and ran it in, finishing with a lower left corner rocket. The Wolves'  keeper knocked down Lopez's pointblank shot a minute later, only to have Rothlisberger rebound and finish for a 5-0 final margin.

It was important for the Wolverines to shut down the Wolves' senior midfielder Mike Duke and his high-powered offense - Coupeville had scored only six goals less than FHHS going into the game, with twelve in the last three games. Friday Harbor was up to the task, breaking up the visitors' attack with steal after steal, with senior keeper Paul Guard locking the door at the net.

FHHS won only 1-0 three weeks ago in Coupeville, scoring in the last 30 seconds to win, and the Wolves hoped for a repeat. "We thought we'd do better, after the last time we played," commented Wolves coach Melissa Martenak afterwards. "We know we're technically better than this. But Friday Harbor played strong with good technique, and smart. They're a good team."

Wolverine coach Ron Duke was pleased with what he saw. "It's good to be back (after the Orcas loss on Saturday.) Today we played the way we like to play, with passing and good defense, and good movement away from the ball. The guys bounced back well."

Friday Harbor closes out the regular season with a playoff tuneup with #8 Seattle Christian (9-2-1) here this Saturday, then continues into the league playoffs Wednesday next week at home. A win there takes FHHS to the Final Eight, with dreams of a state championship that was only a goal away last year. Coupeville will also see playoff action next week, with either Orcas or Mount Vernon Christian as likely opponents.