return to the Update 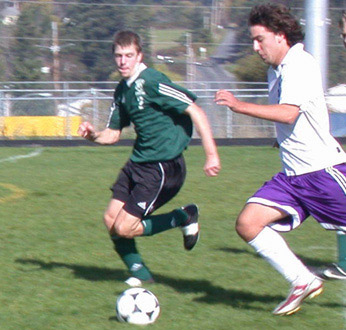 Six Wolverines scored to push undefeated and second-ranked Friday Harbor 8-0 over visiting Shoreline Christian Saturday. The win leaves FHHS (8-0-1) as one of only two unbeaten teams in state 1A soccer. They will face-off with league rival fourth-ranked Mount Vernon Christian (9-2, 6-1 in league) on the mainland on Thursday.

The Wolverines hoped to come out strong and fired up, and succeeded. Two minutes into Saturday's match, senior forward Felipe Lopez (right) arched a rainbow to sophomore striker Erik Nash, who hit the right corner from 15 yards. Lopez dropped a pass back to a wide-open Eric Rothlisberger, and the senior captain drove it home only two minutes later. Junior midfielder Mario Nunez found an open space from 18 yards to bend one into the top left corner at 17 minutes, followed by Lopez stealing the ball from a SC defender and running it in a couple of minutes later.

Sophomore defender Louis Paul mailed home a 23 yarder from the top right corner of the penalty area, followed by another Lopez breakaway to set the halftime score at 6-0. 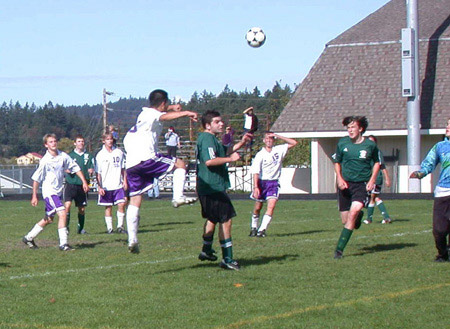 The second half opened with a flurry of Wolverine attempts on goal, with alert midfielder Cameron Byington ramming home a deflected near-score by fellow freshman Jordyn Taylor for his first goal of the season. Nunez (on right, rising to receive a Lopez cross for a near-goal header) closed out the scoring with a well-placed shot from 10 yards to the lower right corner.

The game was paced by the play of Rothlisberger and freshman midfielder Pablo Lopez's pinpoint passing, while the team gave its best effort in closing down an opponent's attack in a couple of weeks. FHHS has now allowed only one goal since their fourth game of the season, and the improving defense has strung together three shutouts.

Meanwhile, the Wolverines can't afford to look past a couple of other hurdles before Thursday: they are scheduled to challenge cross-island rivals Lopez (5-3) on Monday and this same Shoreline Christian squad on Tuesday. (Saturday's match was a make-up game from a match scratched earlier in the season.) The FHHS dance card for the week continues with Orcas visiting on Saturday, for a rare four-game week. Here is the Wolverines' schedule (link.)

Wolverine notes: FHHS has now gone 27 regular-season games without a loss, dating back to the 2003 campaign, following last year's 15-0 run to the league championship....Senior keeper Paul Guard played forward for the last 18 minutes of the game, nearly scoring twice. His last goal scored was as a field player for the junior varsity as a freshman. Taylor stepped in as his replacement and handled a handful of shots cleanly, allowing no scores....

A portfolio of 53 photos from Saturday's game is posted by the San Juan Update here ..... the MVC Hurricanes haven't lost since FHHS beat them earlier this month, and have only allowed five goals this season (four by FHHS). They've outscored their last two opponents 13-0.

In the latest (10/16/05) statewide poll, put together by the San Juan Update, the Wolverines are ranked second behind Overlake (12-0-2), who tied defending state champs, third-ranked University Prep (6-1-3) last week.

[Ian is a long time high school and middle school coach who directed the FHHS girls soccer team in its early years, and also covered professional soccer for the newspapers in Portland. He currently publishes the online San Juan Island Update, beginning its ninth year next month.]